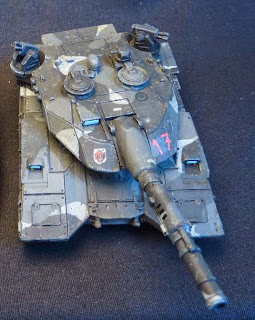 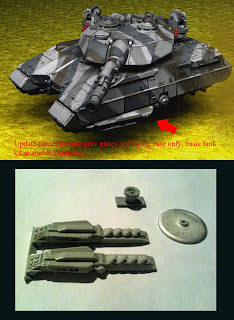 Huge tracked tank with four final drives, very large main armament, two CIDS gatling guns on the turret, and posable hatches for optional crewmen. An update set is also available to make the tank anti-grav, a simple switch of the final drive pieces (replacement pieces are a drop fit) plus a sturdy hover base.
Posted by Don M at 9:56 PM No comments: 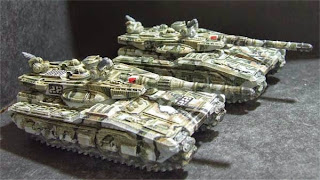 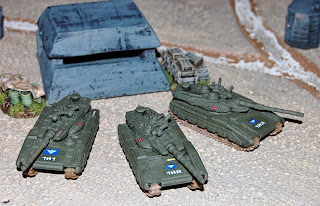 Rebel Minis is proud to present the Merka 5 Medium Tank. The Merka 5 comes with a Main Gun Turret as well as a radar and mini vulcan anti-personnel system. The tank is designed to fit with our 15mm scale sci-fi minis. Sculpted by John Bear Ross, this highly detailed Tank is a must for any Sci-Fi gamer! Check out the Earth Force Infantry teams as well!
Posted by Don M at 5:50 PM No comments: 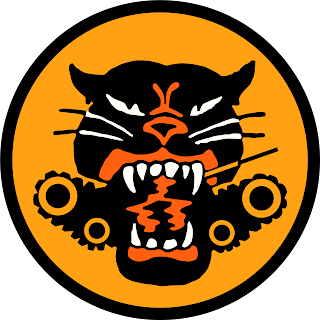 Main article: Tank destroyer battalion (United States)
U.S. Army and counterpart British designs were very different in conception. U.S. doctrine was based, in light of the fall of France, on the perceived need to defeat German blitzkrieg tactics, and U.S. units expected to be faced with large numbers of German tanks attacking on relatively narrow fronts. These were expected to break through a thin screen of anti-tank guns, hence the decision that the main anti-tank units – the Tank Destroyer (TD) battalions – should be concentrated and very mobile. In actual practice, such German attacks rarely happened; throughout the war only one battalion ever fought in an engagement quite like that which had originally been envisaged (the 601st, at the Battle of El Guettar). The Tank Destroyer Command eventually numbered over 100,000 men and 80 battalions each equipped with 36 self-propelled tank destroyers or towed guns. 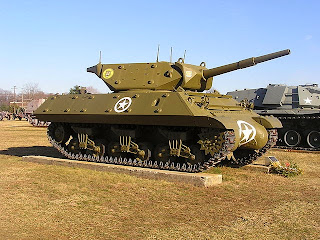 Only a few shots were expected to be fired from any firing position. Strong reconnaissance elements were provided so that TDs would be able to use pre-arranged firing positions to best advantage. Flanking fire by TDs was emphasized, both to penetrate thinner enemy side armor, and to reduce the likelihood of accurate enemy return fire. 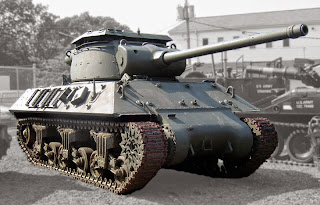 All American tank destroyers were officially known by exactly the same collective term used for American self-propelled artillery ordnance, "Gun Motor Carriage". The designs were intended to be very mobile and heavily armed. Most of the tank-hull based designs used special open-topped turrets, of a differing design to the original tank it was to be based on, which was meant to both save weight and to accommodate a larger gun. The earliest expedient design was an M3 Half-track mounting an M1897 75 mm gun in a limited-traverse mount, and called the 75 mm Gun Motor Carriage M3. Another, considerably less successful, early design mounted a 37-mm anti-tank gun in the bed of a Dodge 3/4-ton truck - the 37-mm GMC M6. By far the most common US design was the 3in Gun Motor Carriage M10 (Wolverine), later supplemented by the 90 mm Gun Motor Carriage M36 - both based on the M4 Sherman hull and powertrain - and the 76 mm Gun Motor Carriage M18 (Hellcat), based on a unique hull and powertrain design, with a slight visual resemblance to what was used for the later M24 Chaffee light tank. The M18 came closest to the US ideal; the vehicle was very fast, small, and mounted a 76 mm gun in a roofless open turret. The M36 Jackson GMC possessed the only American-origin operational gun that could rival the vaunted 88 mm German anti-tank ordnance, the 90 mm M3 gun, and the M36 remained in service well after World War II. The only dedicated American-origin, casemate hull design fighting vehicle of any type to be built during the war, that resembled the German and Soviet tank destroyers in hull and general gun mounting design, was the experimental T28 Super Heavy Tank, which mounted a 105 mm T5E1 long-barrel cannon, which had a maximum firing range of 12 miles (20 km), and was originally designed as a self-propelled assault gun to breach Germany's Siegfried Line defenses. 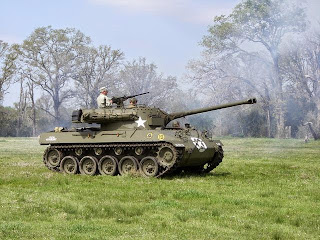 Of these tank destroyers, only the 90 mm gun of the M36 proved to be effective against the frontal armor of Germans' larger armored vehicles at long range. The open top and light armor made these tank destroyers vulnerable to anything greater than small-arms fire. As the number of German tanks encountered by American forces steadily decreased throughout the war, most battalions were split up and assigned to infantry units as supporting arms, fighting as assault guns or being used essentially as tanks.
Doctrinists' expectation that German tanks would be engaged in mass formation was a failed assumption. In reality, German attacks effectively utilized combined arms on the ground fighting cohesively. American tank destroyer battalions comprised three tank destroyer companies supported by nine security sections. The single-purpose tactics of the tank destroyer battalion failed to account for non-tank threats.
Posted by Don M at 3:26 PM No comments: 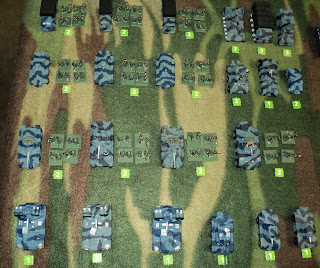 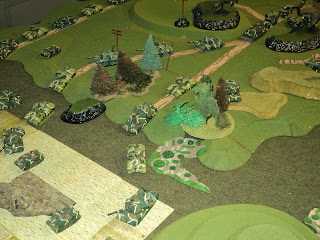 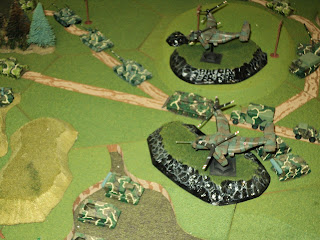 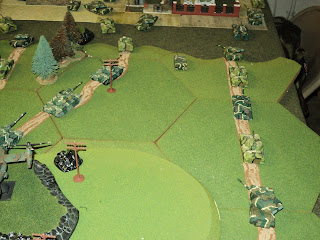 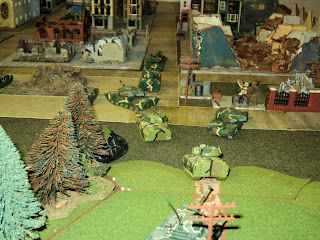 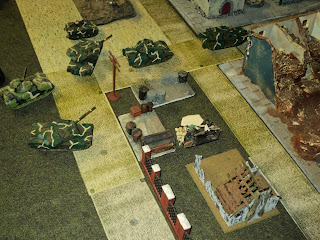 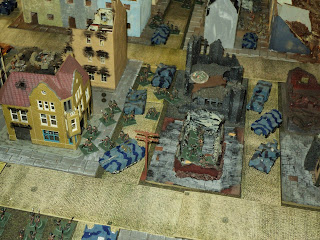 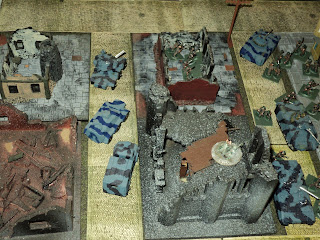 Apr 17, 2013 | by Stephen Bajza
A lot of games these days focus on big guns, big battles, and wreaking all kinds of fantastical havoc across imaginary landscapes. However, any veteran will inherently understand that real-life combat is far from the Rambo-esque antics often found in modern entertainment. "Stargrunt II" is a tabletop game produced by Ground Zero Games that sidesteps most Hollywood aspects of warfare and attempts to mirror what takes place in real firefights, albeit with a science fiction twist.

Stargrunt II
Posted by Don M at 6:20 AM No comments: 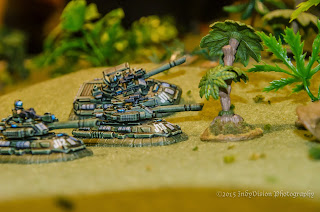 http://www.warpfish.com/gzgecc/gzgecc18/AAR/index.shtml
Posted by Don M at 11:50 AM No comments: 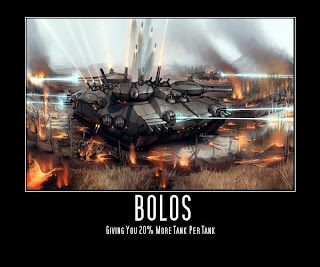 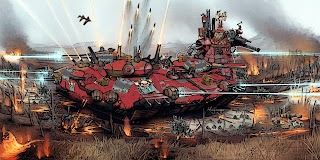 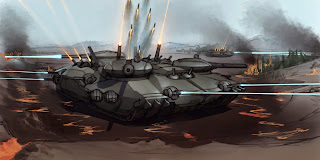 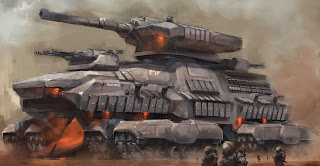