Titan Marines are elite forces trained on Saturn's Moon, Titan. In the past elite Marines were chosen from Earth Force ranks and sent to Firebase Kraken, a training facility built within the ice-core of Titan.

In 2112, communication was cut-off from Firebase Kraken...

http://www.rebelminis.com/titanmarines.html
Posted by His Excellency at 8:38 AM No comments: 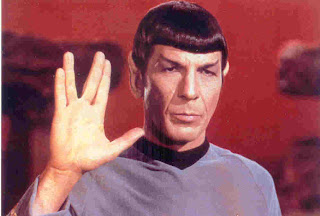 This story was updated at 5:43 p.m. ET.
Leonard Nimoy, the actor who has famously portrayed "Star Trek's" original alien Spock for over 40 years, has announced he's officially hanging up the pointy Vulcan ears for good.
Nimoy, 79, plans to retire shortly from show business and the "Star Trek" convention circuit, according to the Canadian newspaper Toronto Sun.
The actor, director and photographer will be attending the Calgary Comic and Entertainment Expo this weekend, and told the paper that beyond this event he only has a few more public appearances scheduled.
Nimoy also currently guest stars on the television show "Fringe," produced by J.J, Abrams who directed last summer's re-launched "Star Trek" film franchise chronicling a younger original series cast on their first mission on the starship Enterprise.
The retirement announcement all but guarantees that an elder, "from-the-future" Spock (at least played by Nimoy) will not make an appearance in the next "Star Trek" movie.
"I want to get off the stage. Also, I don't think it would be fair to Zachary Quinto," Nimoy told the Toronto Sun, referring to the actor who portrays young Spock in the new Trek film. "He's a terrific actor, he looks the part, and it's time to give him some space. And I'm very flattered the character will continue."
Boldly going from Boston to the bridge
Nimoy, born in Boston, Mass. in 1931, began his acting career at the age of 20, taking on roles in a number of campy science fiction. In the early and mid-1960s, he appeared in episodes of major series including "Bonanza," "Perry Mason" and "Get Smart" in 1966.
Also in that year, Nimoy landed a role in a new series created by Gene Roddenberry called "Star Trek." Nimoy played Commander Spock, the half-human, half-Vulcan first mate and science officer aboard the U.S.S. Enterprise, helmed by Captain James T. Kirk, played by William Shatner.
Nimoy donned fake, pointy, elvish ears, some swooping eyebrows, an early-Beatles hairdo, and a poker face to play the half-human, half-alien character.
Spock – for the most part – maintained a stoic demeanor per his Vulcan ancestry and his green-tinted blood ran cool in his veins. But this uber-"logical" side of Spock occasionally struggled with his more emotional half and was torn at times between the two cultures.
"Star Trek" ran until 1969 and despite low ratings the show garnered a cult-like following on syndication in the years ahead.
Nimoy, for his part, went on to star in a number of made-for-television movies and theatrical productions in the 1970s, his Star Trek days apparently behind him. But when studio executives green-lit a proposed new television series instead as a feature film with the original crew, Nimoy found himself back in his Starfleet uniform.
A career at warp speed
The character of Spock would continue his journey in all six original series movies, as well as episodes of "Star Trek: The Next Generation" episodes in 1991, and then in an alternate timeline established in last summer's Abrams-directed flick. Nimoy also lent his voice to Trek-themed video games and other products over the years, adding to the legend of his character.
Nimoy also directed the third and fourth "Star Trek" movies, the latter of which, 1986's "'Star Trek IV: The Voyage Home," has been roundly received by audiences and critics alike as perhaps the best Trek film of all for its humor and, oddly enough, humanity. (The plot involved time-traveling back to late 20th century Earth to bring humpback whales, extinct in the future, to the 23rd century when "Star Trek" takes place to answer the calls of a devastating alien probe seeking the intelligent makers of whale song whispers heard across space eons before.)
"I felt like 'Star Trek IV' was my personal statement on 'Star Trek,'" Nimoy told the Toronto Sun.
In two autobiographies, 1975's "I Am Not Spock," followed by 1995's "I Am Spock," Nimoy shared his coming-to-grips of being constantly associated with his famous Star Trek character.
In addition to this work, Nimoy has also made musical recordings and done voiceovers for documentaries and as Spock and himself in cartoons such as "The Simpsons" and "Futurama," and of course "Star Trek: The Animated Series" in the 1970s.
"Live long and prosper"
Among his many memorable on-screen moments as Spock, Nimoy came up with the now-iconic, V-shaped hand gesture often accompanied by the Vulcan axiom "live long and prosper," both inspired by his Jewish heritage.
The albeit-less-friendly Vulcan nerve pinch – an incapacitating touch to a neck but more civilized than one of Kirk's wildly exaggerated-for-TV haymaker punches – was also an on-set invention by Nimoy for his character.
Overall, Nimoy's retirement is sure to leave a hole in many "Star Trek" fans and others' hearts. But when pushing octogenarian-hood, retiring – as Spock himself might say – perhaps is the only logical thing to do.
Posted by Bill at 5:50 PM No comments: