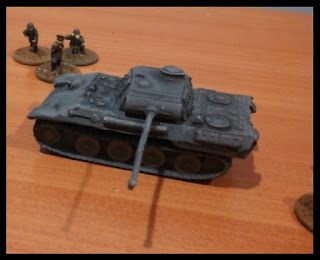 Development of the Panther began in 1941, following encounters with Soviet T-34 tanks in the opening days of Operation Barbarossa. Proving superior to their current tanks, the Panzer IV and Panzer III, the T-34 inflicted heavy casualties on German armored formations. That fall, following the capture of a T-34, a team was sent east to study the Soviet tank as a precursor to designing one superior to it. Returning with the results, Daimler-Benz (DB) and Maschinenfabrik Augsburg-Nürnberg AG (MAN) were ordered to design new tanks based on the study.

In assessing the T-34, the German team found that the keys to its effectiveness were its 76.2 mm gun, wide road wheels, and sloping armor. Utilizing this data, DB and MAN delivered proposals to the Wehrmacht in April 1942. While the DB design was largely an improved copy of the T-34, MAN's incorporated the T-34's strengths into a more traditional German design. Using a three-man turret (the T-34's fit two), the MAN design was higher and wider than the T-34, and was powered by a 690 hp gasoline engine. Though Hitler initially preferred the DB design, MAN's was chosen as it used an existing turret design.
*******************************
Following prototype trials at Kummersdorf in the fall of 1942, the new tank, dubbed Panzerkampfwagen V Panther was moved into production. Due to the need for the new tank on the Eastern Front, production was rushed with the first units being completed that December. As a result of this haste, early Panthers were plagued by mechanical and reliability issues. At the Battle of Kursk in July 1943, more Panthers were lost to engine issues than to enemy action. During the war, Panthers were built by MAN, DB, Maschinenfabrik Niedersachsen-Hannover, and Henschel & Sohn.

The Panther was sent to frontline units in the spring of 1943, and first saw major combat at Kursk. With the correction of the production-related mechanical difficulties, the Panther became highly popular with German tankers and a fearsome weapon on the battlefield. While the Panther was initially intended to only equip one tank battalion per panzer division, by June 1944, it accounted for nearly half of German tank strength on both the eastern and western fronts. The Panther was first used against US and British forces at Anzio in early 1944.

*******************************
As it only appeared in small numbers, US and British commanders believed it to be a heavy tank that would not be built in large numbers. When Allied troops landed in Normandy that June, they were shocked to find that half the German tanks in the area were Panthers. Greatly outclassing the M4
Sherman, the Panther with its high-velocity 75mm gun inflicted heavy casualties on Allied armored units. Allied tankers soon found that their 75mm guns were incapable of penetrating the Panther's frontal armor and that flanking tactics were required.

*******************************
Though the Panther remained slightly superior, high Soviet production levels quickly allowed large numbers of T-34-85s to dominate the battlefield. In addition, the Soviets developed the heavy IS-2 tank (122mm gun) and the SU-85 and SU-100 anti-tank vehicles to deal with the newer German tanks. Despite the Allies' efforts, the Panther remained arguably the best medium tank in use by either side. This was largely due to its thick armor and ability to pierce the armor of enemy tanks at ranges up to 2,200 yards.

*******************************
The Panther remained in German service until the end of the war. In 1943, efforts were made to develop the Panther II. While similar to the original, the Panther II was intended to utilize the same parts as the Tiger II heavy tank to ease maintenance for both vehicles. Following the war, captured Panthers were briefly used by the French 503e Régiment de Chars de Combat. One of the iconic tanks of World War II, the Panther influenced a number of postwar tank designs, such as the French AMX 50. 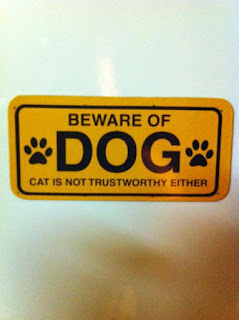 Email ThisBlogThis!Share to TwitterShare to FacebookShare to Pinterest
Labels: Humor


Do to the prompting of Tim G and others about the thrill
of doing the 54mm Little Wars, I remembered this page
Some of the games here CRY OUT to be redone as
Funny Little Wars battles! So Tim  (and all other likely
lads) take a look at this page! Sadly the Ouargistan
Colonial Gaming Group is no longer active but their spirit
lives on thanks to the way back machine Internet archive
Posted by Don M at 10:38 AM 1 comment: 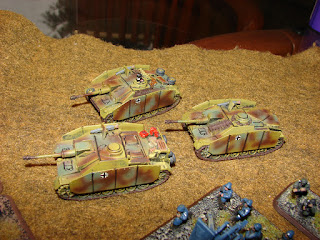 Not really a tank but always liked these little beasts!
Posted by Don M at 3:16 PM 1 comment: 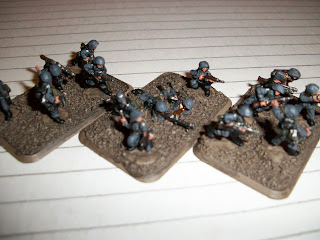 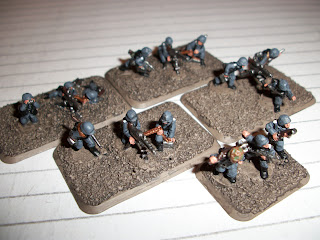 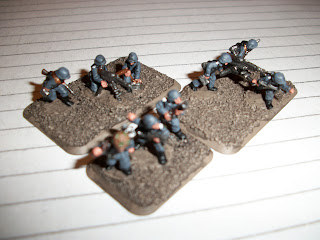 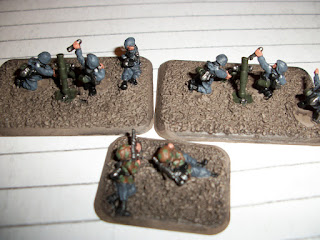 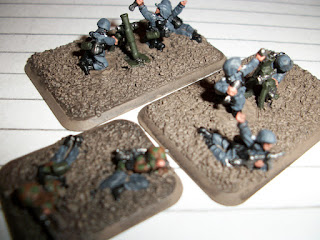 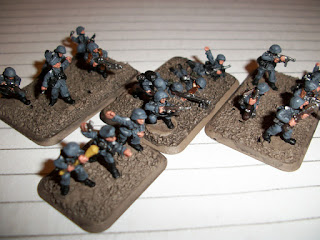 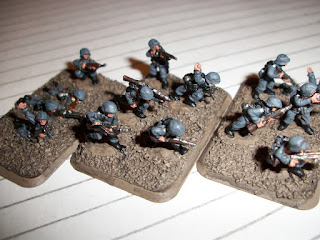 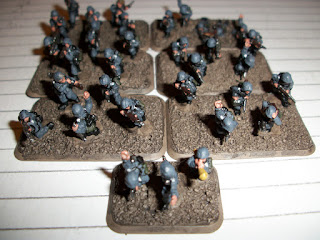 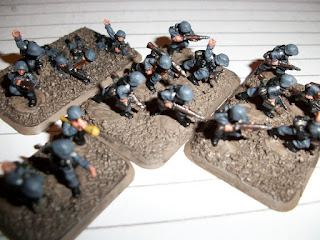 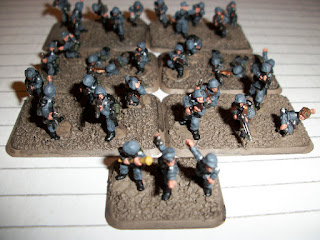 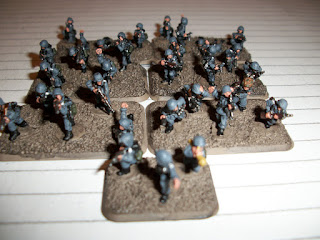 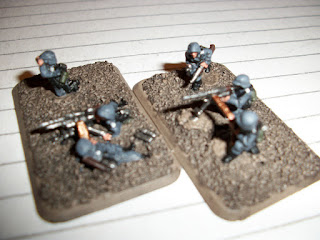 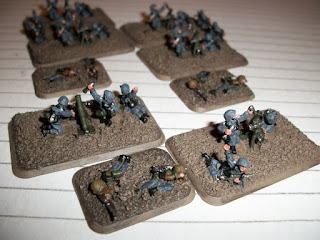 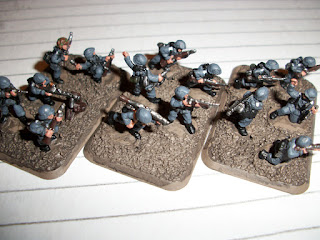 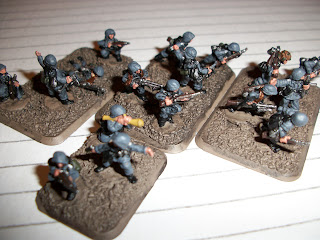 Got these off ebay, to get my butt motivated to paint the pile of German lead on the table!
Posted by Don M at 10:39 PM 2 comments:

Tanker's Tuesday: They Were On Drugs! 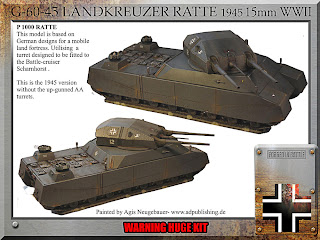 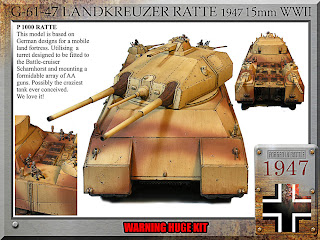 All Quiet on the Martian Front, Miniature Tanks vs Tripods 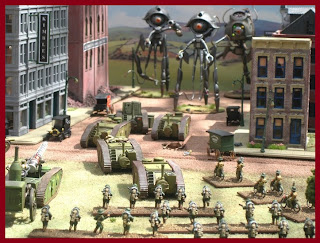 THE WORLD OF ALL QUIET ON THE MARTIAN FRONTThe Martian attack of 1898 brought terrible devastation to the city of London and set the course of human history upon an altogether unexpected path. Amongst the ruins of the greatest metropolis on Earth, the Martians had - in the end – faltered and perished. Everyone now knows that these invaders were overcome, not by the might of Queen Victoria’s armies, but by nature’s own forces of disease and decay. Against these mere microbes, the Martians’ superior minds could muster no defense. Where mankind had failed, the smallest and least significant of all Earth’s organisms had triumphed.
Although the Martian invasion shocked the world and caused widespread panic in the days that followed, by the early years of the twentieth century, many influential thinkers were eager to proclaim the aliens a spent force. Fear of further alien attack was gradually displaced by the humdrum concerns of life and commerce. It is sobering to reflect that most people were happy to accept this misguided notion, as we now know it to have been. All over the world, only a few visionaries continued to warn that the first attack might have been a scouting foray, the precursor to a full-scale invasion. They urged humanity to ready itself for war or risk extermination. These men were openly ridiculed and all too often dismissed as alarmists and cranks. Few even noticed the arrival of the second wave of Martian cylinders that fell to earth sometime around the end of 1908. By the time the Martian presence came to the attention of the governments of Earth, it was already too late. 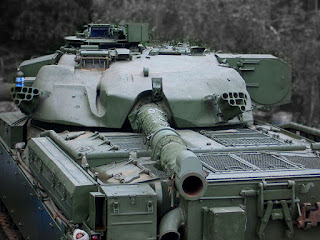