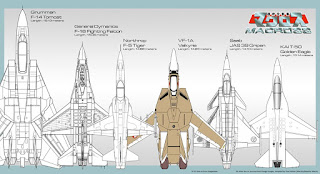 Monday's weekly post for the Macross Mecha Manual Facebook page has generated great interest and numerous comments. Many fans have been asking questions that ponder how the VF-1 Valkyrie compares to real world fighter craft. Fans have also expressed concerns the VF-1 Valkyrie is too small or is rather odd when depicted at its official size.

To place the VF-1 Valkyrie in proper context, I've made a quick chart using images from the internet. It's a bit rough and low resolution, but it works. Rather than choosing fighters far larger or far smaller than the VF-1, I've picked several real fighter craft that are roughly the same size. This should help fans visualize the VF-1 Valkyrie in proper context. It should also show fans that despite its modest length, the VF-1's volume and construction are rather generous for a craft of its size. 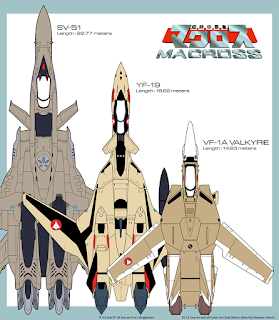 Macross Mecha Manual
Posted by Don M at 8:55 AM