War of the Worlds: The Anglo-Martian War of 1895 (Dark Osprey) 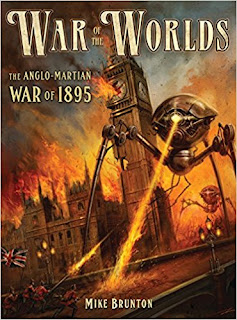 On one terrible night in August 1895, the world changed for ever. Southern England became the landing site of a group of mysterious grey cylinders that came hurtling down from the stars. Nobody could have guessed that these strange objects would herald the most desperate and important conflict in the history of mankind. The war pitted man against machines from space and no quarter was asked for or given on either side. The outcome would be decided by the smallest of things...
This is the essential guide to the Anglo-Martian conflict of 1895, offering unique comparison of the two belligerents, English and alien. It looks at the forces available to each and evaluates their respective tactics and strategies. Finally, it tells the full story of those fateful fifteen days, punctuated by the best and worst possible human experiences. It is a story of hope and despair, courage and terror, victory and defeat.

Email ThisBlogThis!Share to TwitterShare to FacebookShare to Pinterest
Labels: Acquisitions, All Quiet On The Martian Front, Arts and Literature, British Empire, The Great Martian War, WOTW 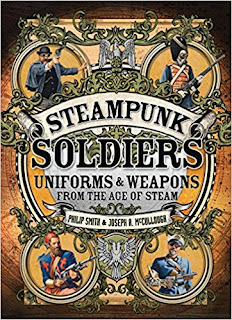 Steampunk Soldiers is a unique pictorial guide to the last great era of bright and colorful uniforms, as well as an important historical study of the variety of steam-powered weaponry and equipment that abounded in the days before the Great War of the Worlds.
Between 1887 and 1895, the British art student Miles Vandercroft travelled around the world, sketching and painting the soldiers of the countries through which he passed. In this age of dramatic technological advancement, Vandercroft was fascinated by how the rise of steam technology at the start of the American Civil War had transformed warfare and the role of the fighting man. This volume collects all of Vandercroft's surviving paintings, along with his associated commentary on the specific military units he encountered.

Email ThisBlogThis!Share to TwitterShare to FacebookShare to Pinterest
Labels: Acquisitions, Arts and Literature, British Empire, France, German, Not To Be Confused With History, Our VSF Campaign, Uniforms

Even as the discovery and exploitation of hephestium helped bring the Civil War to its close in 1869, the arms race it engendered resulted in a cold war just as bitter and violent as open hostilities had been. With neither side willing to rely solely upon the talents of their scientific establishments, saboteurs, double agents, and assassins found ample employment. Against this backdrop of suspicion and fear, thousands of Americans--Northerners and Southerners alike--headed west. Some to escape the legacies of the war, some to find their own land, some for the lure of that great undiscovered strike of hephestium that would make them rich, and some simply to escape the law. Ahead of these pioneers stood the native tribes, behind them followed the forces of two governments, while to the north and south, foreign powers watched closely for their own opportunities.
This newly unearthed collection of the works of Miles Vandercroft fills a considerable gap in our knowledge of the travels of that remarkable individual, and also provides a fascinating guide to the costume and equipment of the forces active in the great drive westward.

Email ThisBlogThis!Share to TwitterShare to FacebookShare to Pinterest
Labels: Acquisitions, Arts and Literature, Not To Be Confused With History, Our VSF Campaign, The Americas, US Army

Made for a Japanese Comic, I think it's perfect for my
AQMF Italians.....) 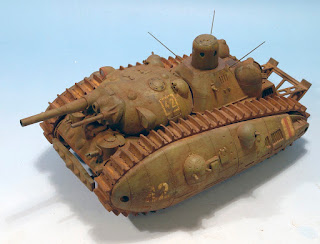 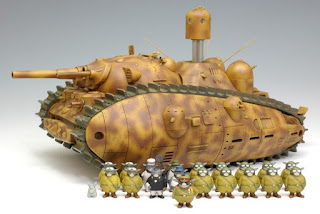 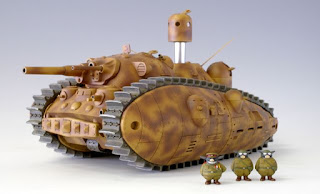 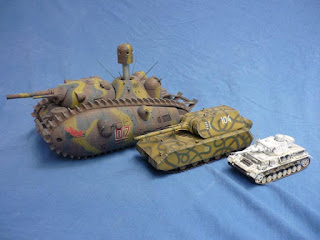 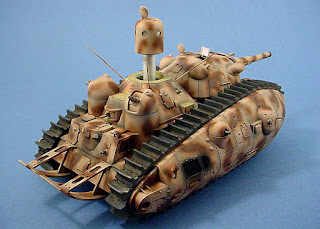 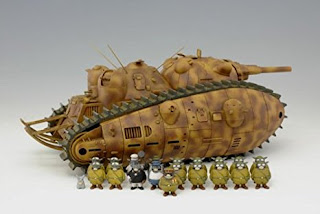 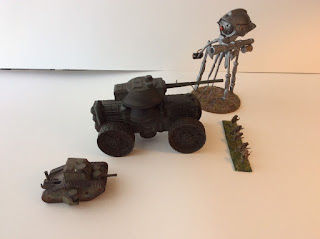 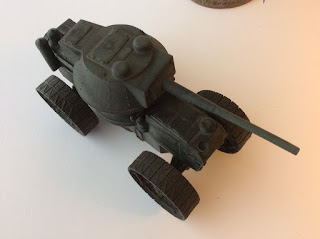 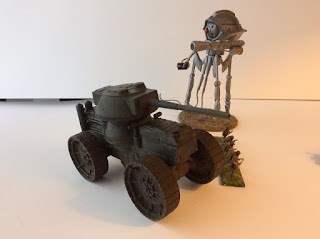 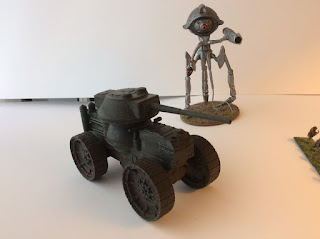 Email ThisBlogThis!Share to TwitterShare to FacebookShare to Pinterest
Labels: Acquisitions, All Quiet On The Martian Front, Figures And Modeling, Landships, Tanker's Tuesday, The Great Martian War, US Army, WOTW

How To: Practical Sci-fi Spaceship Models on a Budget!

Some reinforcements for my British Indian army: 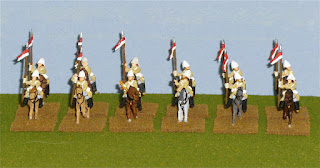 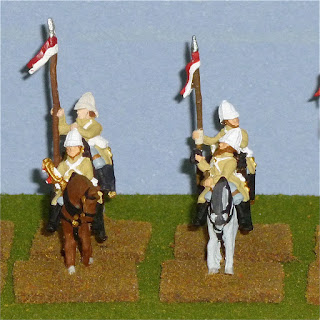 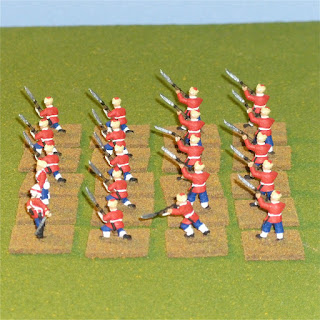 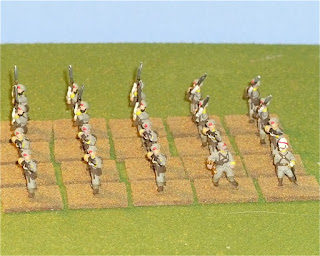 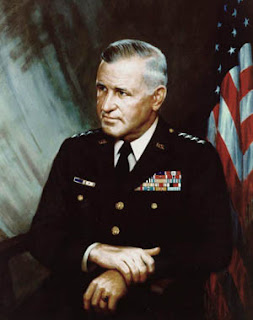 The battalion was five miles short of its goal that afternoon when its commander, Lieutenant Colonel Creighton Williams Abrams, Jr., stood on a hill and gazed northward toward Bastogne. Born in Springfield, Massachusetts, the oldest son of a Boston & Albany Railroad repairman, Abrams was a stocky, lantern-jawed, cigar-chomping cavalryman who had graduated from the U.S. Military Academy in 1936 and become a courageous, resourceful professional soldier respected by all who knew him. He had earned the respect of Patton.
On that December 26, 1944, Abrams was down to 20 tanks, enough for one more assault. Should he take a chance and ask for permission to head straight for Bastogne, regardless of the strength of enemy opposition? Just then, waves of Douglas C-47 transports roared overhead and started parachuting supplies into Bastogne. Abrams’s mind was made up, and he dashed back to his Sherman, nicknamed “Thunderbolt IV,” and radioed Major General Hugh Gaffey, commander of the 4th Armored Division, for permission to move ahead. The word came a few minutes after 3 p.m.


Abrams At The Battle Of The Bulge
General Creighton Abrams
Posted by Don M at 5:14 AM No comments:

The Battle of the Bulge

Erwin Rommel and the Atlantic Wall

France and the Atlantic Wall 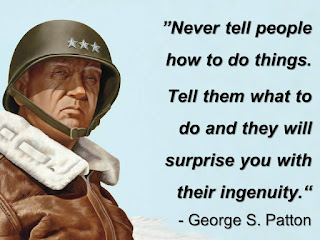 A good plan violently executed right now is far better than a perfect plan executed next week.
General George S Patton
Posted by Don M at 1:10 AM No comments: 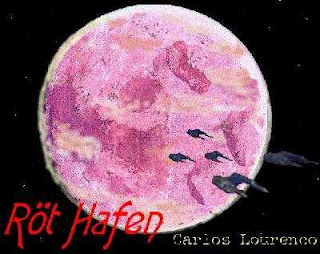 I am taking shameless advantage of my editorial status to add a forward to the Röt Hafen Saga. The work hardly requires a forward, but I think it deserves one. It is a large work (> 250,000 words) into which many an hour has been invested for no profit other than the joy of the work and the enjoyment of the readers. We present it here on stargrunt.ca with great pleasure, in its entirety. It has been modified to fit our presentation format and to correct the occasional typo or spelling error, but the content remains essentially pure and unchanged.
The Röt Hafen Saga is a story about some of the earliest Human-Kra'Vak interactions and gives us one possible view of the early stages of the First Intersentient War. It presents some ideas on the way that conventional and unconventional forces operate in the GZGverse and it gives us a little bit of a glimpse at one author's version of the Kra'Vak. It is, as most work created by the fans of the Ground Zero Games universe, non-canonical and unofficial. But it does represent one view of how things could be, and a compelling vision at that.
For the information of those who may not know him, Carlos is a United States Army Special Forces soldier who tends to spend large chunks of his time away visiting interesting places and doing missions which pretty much require an Elite RED-1 quality counter. But this day job gives Carlos a good feel for the military millieu and some neat ideas for how Special Operations might be carried out in the future. His experience also gives him a good feel for the kind of men that serve in these units and the way they carry themselves and how they should best be portrayed.
The interesting part of this work is not only that it obviously entertains a certain "reality", but also that much of it was played out at the game table, from small unit actions to large scale fleet battles, using Ground Zero Games rules (and of course the obligatory house mods!). This just shows what a motivated gamer (read: individual of questionable sanity) can accomplish. It also illustrates in some detail how one can put together a series of linked games to form an interesting campaign and how that campaign can be documented for the benefit of other gamers.
The question one might think to ask is: Which came first, the games that spawned the saga or the ideas for the novel which lead to scenarios? (more on this point later)
Readers should find this story gripping and action-packed. It is, as the old saying goes, "a page turner" (or perhaps, in the electronic world, "a button-clicker"). My hope is that each and every one of you will enjoy it as much as I did and that you will take the time to visit Los' website and drop him some positive feedback. He deserves it after this gigantic effort and he undoubtedly will appreciate it!
But, I digress. I'm good at that! Anyway, stop reading my work, go to the left side nav bar, and start reading Röt Hafen! (Of course, you should read the acknowledgements and copyright statement and visit the game links too, but you can do that later!).

Thanks to everyone who helped me through this project, too many to name. First off all to the readers, many of whom I don't know but who kept up a steady stream of emails for the past 18 months. This story is for you.
Thanks to all on the GZG mailing list for providing the motivation to start this and the encouragement to keep going. And in particular: Jon Tuffley for cooking up the great GZG series of games, Tom Barclay, Owen Glover (the real one) Brian Bell, Chris Deboe, Beth Fulton, Jon Davis, Marc Kochte, Will Keyser, Bob Makowsky, Tim Jones (for the great graphics) and everyone else who has sent me feedback, criticism, advise, graphics and help along the way.
All errors in this work are mine alone but everything done right is the sum of all of the contributions.
I'd also like to thank the real members of ODA 946 and other Company A guys I've served with. Together they provided the experiences that form the foundation for the action here, (especially Ken).

Special acknowledgements must be made to the people who contributes the images which helped realize the Röt Hafen Saga. These people include....
Two last people to thank: One is my beautiful wife Natalie. She put up with all these late nights of obsession and also helped with the proofing (I am going to go back and incorporate all the changes now as well as add more GZG-gming pertinent information) and the other is Kurt Wasserman. He provided close on-going technical support and also helped me game out many of these battles, acting patiently as the kra'Vak commander while fighting usually with one arm tied behind his back. Weaselboy is da man!

First, I refer readers to our site copyright notice here. Further to the general statement of copyright, Carlos has added his own statement which also applies (reproduced following my notes). The content of the Röt Hafen Saga is exclusively the intellectual property of Carlos Lourenco and our reproduction of his e-novel here is done with his written permission.

I have written these stories for no other reason than pure enjoyment. The terms NSL, NAC and maybe a few others are copyright Ground Zero Games. Their use in the story is without permission and not meant as a challenge to said copyrights. If you plan to post it to your page GIVE ME CREDIT. ENJOY! These stories may not be used by anyone for profit or for sale. Copywright: Carlos Lourenco 1998.

Acquisitions from Khurasan Miniatures and GZG 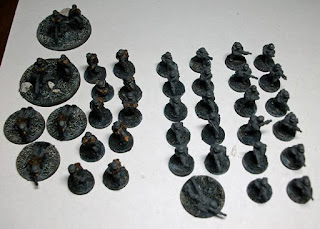 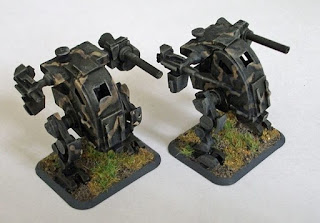