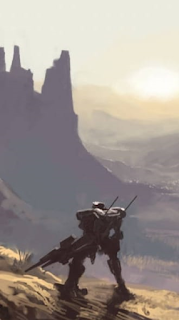 The Drachen WHISPER is a product of the Draconian War. The combined forces of both rebel Draconians and outlaw pirates in the opening weeks of the war were tough and driven fighters. They had taken over a dozen city-states, and then moved on one of the larger population centers. They completely overran the city-state of New Berlin in a matter of hours.
Out of the chaos, a group of four WHISPERs were able to fight a prolonged three-hour engagement with the pirates, buying enough time for more civilians to evacuate the city's confined streets. These WHISPERs were the first sighting of the Drachen. Two of the pilots were killed in action, with the remaining pair escaping to the wastelands leading to the southern marshes.
Once there, they made contact with troops from Alsafi. Their pilots and maintenance crew revealed they had the entire production program and design specifications for the Drachen in hand. They promised to give Alsafi's governor, Dumas, and troops the specifications for mass fabrication, on one condition; the design was to be shared with their neighboring city-states as well.
When Governor Dumas balked, the commander of the local defense regiment rebuked him and personally deposed the governor. Dumas then fled to the rebels and became a leader in their organization. Meanwhile, First Colonel Petruch took the mantle as Warden of Alsafi until the people could hold a new election. He accepted the terms of the pilots. He then transferred the plans to every other local defense commander of the remaining free city-states.
By the time that the rebels' next offensive was opened on Alsafi, a formidable force of 78 Drachens had been assembled. Led by Warden Petruch and several senior marshals, they were able to destroy 15 enemy WHISPERs, damage a dozen more, and force the rebels and outlaws back across the desert.
The Drachen would remain as the mainstay of the free Draconians for the remaining year and a half of the war. Although in some places the design was stolen and reused by the outlaws, the Draconian militia were quick to find such outlier machines and destroy them posthaste, wanting to keep the design from being used against them or escaping the planet to the galaxy beyond.
Today, the Drachen remains a capable WHISPER, a testament to the ingenuity of the original creator. Its construction is similar in some respects to the Kyzaghan, melding polymer muscle fiber bundles with hydraulically powered components to give it greater strength while easing maintenance and repairs.
The design was made specifically for Sigma Draconis' desert, savannahs, and more tropical southern hemisphere. Its feet are wider, allowing for better weight displacement on soft sand and soil that would otherwise bog the pilot down. Like the Cutter WHISPER and other first and second generation WHISPERs, the cockpit is located directly underneath the sensor head, allowing the pilot to eject in the event of an emergency. Meanwhile, a miniaturized early fourth-generation Tiggs-Dyson generator gives the Drachen a near unlimited range on the planet surface.
The downside to the design is that it is a ground-only combatant, with only a pair of vernier thrusters allowing it to complete a few short boosted jumps to scale higher heights. Otherwise, the Drachen requires an extended backpack containing additional vernier thrusters and fuel for prolonged space combat.
Most standard issued Drachens are armed with a 100mm high-velocity smoothbore cannon, although a percentage were found to be equipped with a directed-energy weapon system. The Drachen's DEW was dubbed the D-72-16 'Pyro'. Designed with an 16-centimeter aperture, it was capable of a rapid 10-shot burst, each pulse 'amassing' 72 kilojoules' worth of energy. The Pyro's 'barrel' is a shroud that protects the internal aperture from being covered in mud, sand, or rain while in combat, ensuring reliable operation. There are also recorded instances where the weapon could have an internal safety disabled and fire bursts of up to 25 shots in rapid succession as a suppressive measure, although this rapidly overheated the weapon and was used more in last-ditch stands than as a standard combat tactic.
The rarest DEW deployed with Drachens was the D-110-25, or 'Lightning' DEW. Reverse engineered from a half dozen varying corvettes' armaments, this massive shoulder-mounted beam weapon could employ a 20-shot burst of 110 kilojoules in 0.4 seconds. The energy output alone required that it have a direct connection to the Drachen's generator to be discharged and recharged, and later models employed a separate generator in a backpack installation to allow the machine to maneuver while firing. A true one-shot-kill weapon, it was known for carving through three main battle tanks in heated combat scenarios, and Lightning Drachens scored kills on a dozen corvettes in atmosphere.
Today's Drachen has been updated and modified as the decades have passed, and preliminary findings from the Martian Conglomerate and the Federation both estimate that a Drachen is still a medium-priority threat to even third and fourth-generation WHISPERs.
The Draconian pilots, many trained under the very veterans that kept their planet from falling into chaos, are never to be underestimated.